I was provided a copy of this book from the publisher, so thank you to Entangled Teen for the opportunity to read and review it! Seventh Born is the first book in The Witchling Academy series by Monica Sanz and was just release so you can read it now! It is a YA/NA paranormal story with some light romance, mystery, and historical vibe. 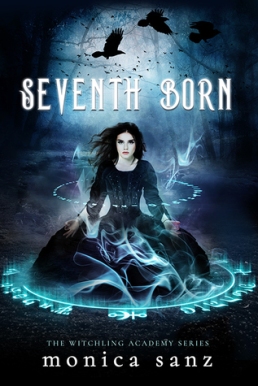 Abomination. Curse. Murderer. All names hurled at eighteen-year-old Seraphina Dovetail. As the seventh-born daughter to a witch, she’s the cause of her mother losing her powers and, in turn, her life.

Abandoned as a child, Sera dreams of becoming an inspector and finding her family. To do that, she must be referred into the Advanced Studies Program at the Aetherium’s Witchling Academy. Her birth order, quick temper, and tendency to set things on fire, however, have left her an outcast with failing marks…and just what Professor Nikolai Barrington is looking for.

The tall, brooding, yet exceedingly handsome young professor makes her a proposition: become his assistant and he’ll give her the referral she needs. Sera is quickly thrust into a world where witches are being kidnapped, bodies are raised from the dead, and someone is burning seventhborns alive. As Sera and Barrington grow ever closer, she’ll discover that some secrets are best left buried…and fire isn’t the only thing that makes a witch burn.

I was quite surprised by how much I liked this story – I finished it in two days and I plan to read the future installments.

I’ll start with my biggest critique first though, as it has to do with the setting and I can’t really discuss the rest without addressing it.  The description of the story and even the first few chapters make it really difficult to discern the setting of the story and world. They way it’s written is almost as if the story and locations of the scenes exist in a vacuum.  There is basically no context to where and when the characters are – is this a fictional world, is it the past, is it the future? – we really have no idea.  Through context clues, the language, horse drawn carriages and lack of modern technology or mentions of our modern world – it has more of a historical feel but likely takes place is a different world rather than our past.  There are never any mentions to what country, planet, realm, city or etc. that the characters live in or are from.  There are mentions of small towns briefly when the characters are there but it’s in passing and does nothing to develop the world. The magic and how everything is the way it is wasn’t really explained either, so you just take what you’re given and accept it as is and learn the rest as you go along from actions of the characters.  From the title of the series and beginning of the book you’d also think that the main character would be spending more time in the actual academy and that the academy would have more of role and personality like Hogwarts but it was often just a place Sera was between the action.  My second biggest criticism is the seventh borns – why are so many people having SEVEN children, especially when they know the consequences of having a seventh!? Is there no birth control?! If seventh borns were rare I’d maybe get it but throughout the story is seems like there are or have been TONS – maybe this could have been explained if we knew more about how big the world is and how it worked better.

Okay on to the good stuff!! Despite lacking in the world building – the book was well written and the writing was atmospheric and spooky and gave me the right kind of feels.  The historical vibe added to the spook and gloom and made everything feel even more mysterious and magical.  There are lots of dead bodies, graveyards, and ghosts!

Sera is a seventh born, but what’s most intriguing about her is her temper and tendency to light things and people on fire – she literally does not take shit people. And oh yeah, she has NO memories of her past except spending a year or so being tormented and tortured by some evil dude who wanted to steal all her magic for himself.  Sera has got spirit, morals, and a drive to achieve what she wants despite the odds.

She has a friend named Mary who is quite hard to read and I couldn’t tell if it was due to the confusing setting – she was always calling Sera “my dearest”.  Then there is Timothy, a high class very attractive student in the school that Mary likes, but he seems to be interested in Sera instead.  Also it seems like marriage happens really young for people in this world, again the ambiguous setting made it confusing. I also found it confusing why either of these students would be interested in Sera if she was this detested seventh born by everyone else.  We do learn some more about their motivations as the story continues, but again I felt like better world context could have made it easier to understand these characters – though this did add to the mysterious feeling of the story and had me reading faster.

Then there is Barrington and oh man. I reALLY liked him.  He’s swoony, brooding, mysterious, snarky, smart, strong, protective, flawed etc etc.  I loved learning more about him and seeing what he could do.  He’s an inspector which is basically like a detective and he hires Sera to be his assistant to solve a mystery – he even carries a little notepad with him! I was shipping him and Sera basically from the start (he’s 25 and she’s 18, and he’s not *technically* her professor) and their interactions are a slow burn subtle growing of affection and trust but has yet to turn full on romantic. We really get a lot from him as the story moves forward and I will be continuing this series for him. Also because I’m so curious about both his and Sera’s past and family history.

Recommend to fans of historical paranormal YA/NA about witches, necromancy, and investigating mysteries.

Leave a Reply to Bookish: The Liebster Award – The BookNook UK Cancel reply