My husband and I recently did a weekend trip to Asheville, NC and amongst all the other amazing local shops and restaurants, we came across Malaprop’s Bookstore and Cafe.  It’s this lovely local and independent bookstore and the reason our visit there stood out so much is their shelf of “Blind Date” books!  Its a shelf with a sign that says “Blind Date with a Bookseller (or their favorite books anyway)”  and the staff’s favorite picks are wrapped in brown paper and then posted with the price and a list of words describing what the book is like.

Whaattttt!! This is literally the best way to not judge a book by it’s cover! Guys, I seriously wanted to buy them all because the words were so great and also it just felt like all these presents waiting to be opened; I wanted to know what they all were!

Also, I seriously want to steal this idea for my dream bookstore.  One of the staff there told us it wasn’t originally their idea but it’s definitely working well for them.

(You could ask the staff to let you know what a book was by it’s number if you really wanted to be a cheater… I actually did ask about one that I had to leave behind but wanted to check out later; I’ve since added it to my TBR lol.)

I had so many in my hands! It was tough narrowing it down, my husband picked out two for himself and when I was struggling to get my down from three to two he suggested I just get them all so, treat yo self!

The staff there was great and they folded up the receipt and reminded me to keep it out of sight until we unwrapped our books if we didn’t want the surprise spoiled.  And they let us know if we ended up with a book we already owned or wasn’t our taste that we could return it within 15 days.  (Spoiler: we decided to keep them all!) 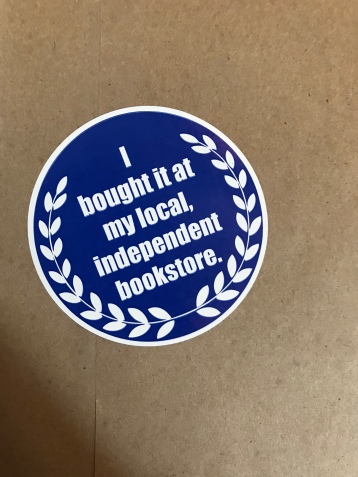 After we left the bookstore we headed over to a local craft beer destination, Thirsty Monk, to have some drinks and open our presents. It was a magical time. We took turns unwrapping our books but I’m going show off mine on here first and then the husband’s. I also added links to the each book’s goodread’s profile so you check them out.

Can you even with these trigger words??? I’m always down to check out a new YA novel and the words raunchy, bizarre, and Vonnegut-esque paired with beautiful, compelling, and poignant?! I just HAD to see what this was about.  Obviously I had no idea what I was getting myself into but I was certainly not expecting anything like what a I got.

This book, with this crazy title, sounds so – to borrow it’s own descriptor – BIZARRE! I’m probably most excited about this one because just what the what. Here’s the goodread’s description:

“Sixteen-year-old Austin Szerba interweaves the story of his Polish legacy with the story of how he and his best friend , Robby, brought about the end of humanity and the rise of an army of unstoppable, six-foot tall praying mantises in small-town Iowa.

To make matters worse, Austin’s hormones are totally oblivious; they don’t care that the world is in utter chaos: Austin is in love with his girlfriend, Shann, but remains confused about his sexual orientation. He’s stewing in a self-professed constant state of maximum horniness, directed at both Robby and Shann. Ultimately, it’s up to Austin to save the world and propagate the species in this sci-fright journey of survival, sex, and the complex realities of the human condition.” 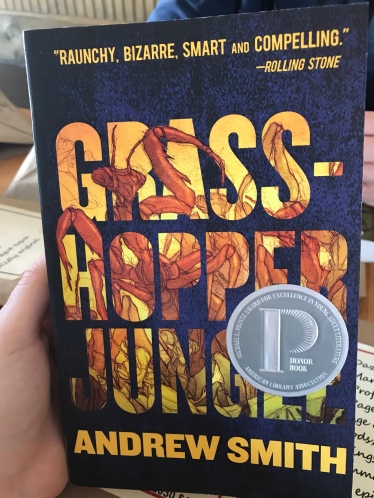 This one caught my attention because although I’m an avid romance reader, I’m always drawn to the science fiction genre.  And then of course knowing it’s a Hugo Award winner has me pretty much on board for whatever it could be.  But the descriptors of thought-provoking and Asimov-esque officially sold me.  One of my favorite books ever, is The End of Eternity by Isaac Asimov and it totally blew my mind, I loved how thought provoking it was and how much I realized that I profoundly agreed with the message of the story.  Since then I’ve been working my way through Asimov’s Foundation Trilogy.  He’s also the author who’s books were turned into movies like I, Robot and Bicentennial Man.

Turns out this is a book I’ve come across before and is probably buried in my TBR list somewhere so I’m actually quite glad it’s one I ended up with. It’s also the first book in the Remembrance of Earth’s Past trilogy. Here’s the goodread’s description:

“The Three-Body Problem is the first chance for English-speaking readers to experience this multiple award winning phenomenon from China’s most beloved science fiction author, Liu Cixin.

Set against the backdrop of China’s Cultural Revolution, a secret military project sends signals into space to establish contact with aliens. An alien civilization on the brink of destruction captures the signal and plans to invade Earth. Meanwhile, on Earth, different camps start forming, planning to either welcome the superior beings and help them take over a world seen as corrupt, or to fight against the invasion. The result is a science fiction masterpiece of enormous scope and vision.”

The Three-Body Problem by Cixin Liu

Okay so this one was the most surprising pick for me.  This is definitely not a book I would have picked out for myself at all. My husband teased me after I opened it for not guessing the greek mythology context of the book from the descriptor words “age of heroes, god, kings, and immortal fame”.  To tell you the truth I had focused more on the descriptors dazzling, page-turner, and epic love.  Mostly epic love.  Romance junkie at her best.

I had never heard of this author or her work but after looking this book up on goodread’s and seeing all the excellent reviews and ratings I knew the rest of the bookworld must be on to something and that I’d be a fool not to give this book a chance.

Also since I read so much I’ve developed an overactive belief in fate. I have that weird voice in the back of my head being like, it’s fate that you picked this book, it was meant to be, goodreads so says so, everyone says so,  and therefore you must read it.  Anyways, here’s the goodreads description:

“Greece in the age of heroes. Patroclus, an awkward young prince, has been exiled to the court of King Peleus and his perfect son Achilles. By all rights their paths should never cross, but Achilles takes the shamed prince as his friend, and as they grow into young men skilled in the arts of war and medicine their bond blossoms into something deeper – despite the displeasure of Achilles’ mother Thetis, a cruel sea goddess. But then word comes that Helen of Sparta has been kidnapped. Torn between love and fear for his friend, Patroclus journeys with Achilles to Troy, little knowing that the years that follow will test everything they hold dear.

Profoundly moving and breathtakingly original, this rendering of the epic Trojan War is a dazzling feat of the imagination, a devastating love story, and an almighty battle between gods and kings, peace and glory, immortal fame and the human heart.”

The Song of Achilles by Madeline Miller 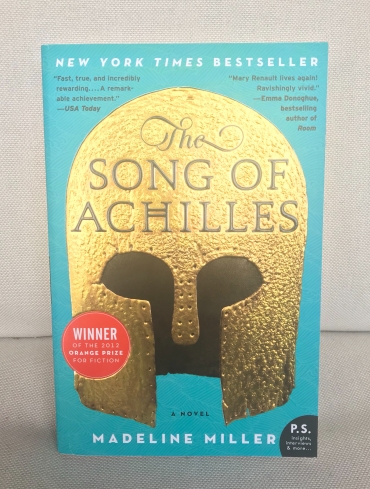 My husband is a huge fan of any kind of dark comedy or stories of the mundane that are dark but show humanity in a moving way.  So I was not surprised at all that this list of words caught his attention.  When I asked him which of the words stood out the most that made him want to buy it and see what’s inside he said his trigger words were: dark, funny, bighearted, quietly strange, and unforgettable.

Neither of us had heard of this author or title before so it was fun to get something completely new.  Also, I was pleasantly surprised to see that, when he didn’t have a cover or author’s name available, he ended up with a female author. He is more excited to read the second book he chose but is still adding this to his TBR list.  Now I just have to decide if I want to add it to mine as well… here is the goodreads description:

“From the New York Times–bestselling author of The Jane Austen Book Club, the story of an American family, middle class in middle America, ordinary in every way but one. But that exception is the beating heart of this extraordinary novel.

Meet the Cooke family: Mother and Dad, brother Lowell, sister Fern, and our narrator, Rosemary, who begins her story in the middle. She has her reasons. “I spent the first eighteen years of my life defined by this one fact: that I was raised with a chimpanzee,” she tells us. “It’s never going to be the first thing I share with someone. I tell you Fern was a chimp and already you aren’t thinking of her as my sister. But until Fern’s expulsion, I’d scarcely known a moment alone. She was my twin, my funhouse mirror, my whirlwind other half, and I loved her as a sister.”

Rosemary was not yet six when Fern was removed. Over the years, she’s managed to block a lot of memories. She’s smart, vulnerable, innocent, and culpable. With some guile, she guides us through the darkness, penetrating secrets and unearthing memories, leading us deeper into the mystery she has dangled before us from the start. Stripping off the protective masks that have hidden truths too painful to acknowledge, in the end, “Rosemary” truly is for remembrance.”

We Are All Completely Beside Ourselves by Karen Joy Fowler 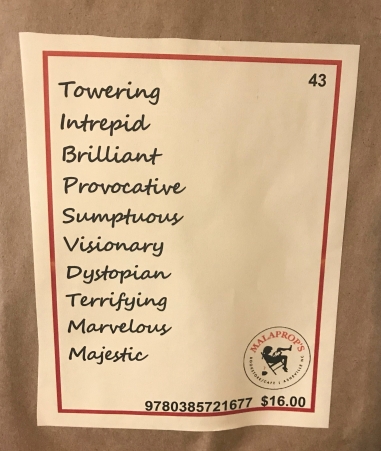 Obviously I know my husband and you guys don’t but it’s like he wrote these words himself and was like “world, find me a book that matches this.”  He loves his stories to be profound and beautiful in their darkness.  I asked him which words stood out the most to make him pick this one up and he said dystopian, visionary, terrifying, and brilliant. He also said he’s a sucker for dystopians.

We both hadn’t heard of this title specifically but we definitely know who this author is and of her most iconic work.  Again I was practically giddy that he ended up with another female author.  I can’t wait for him to read this one and tell me his thoughts.  He said he’s most excited to read this one of his picks, and honestly I’m surprised neither one of us has read any of her works before.  I’ll probably have to this give one a shot too.  Here’s the goodreads description:

“Oryx and Crake is at once an unforgettable love story and a compelling vision of the future. Snowman, known as Jimmy before mankind was overwhelmed by a plague, is struggling to survive in a world where he may be the last human, and mourning the loss of his best friend, Crake, and the beautiful and elusive Oryx whom they both loved. In search of answers, Snowman embarks on a journey–with the help of the green-eyed Children of Crake–through the lush wilderness that was so recently a great city, until powerful corporations took mankind on an uncontrolled genetic engineering ride. Margaret Atwood projects us into a near future that is both all too familiar and beyond our imagining.”

Oryx and Crake by Margaret Atwood

Let me know what you guys think, was this a good haul?

Have you read any of these books? Which should I read first?

Who wants to help me open a bookstore selling only blind date books?