This is my first TOP TEN TUESDAY guys!
(I’m actually writing this on not a Tuesday cause laa dee daa look at me scheduling posts like a good little blogger lady!)

Anyways, if you’re like me and are new to the world of Book Blog Memes: Top Ten Tuesday was created by The Broke and the Bookish in June of 2010 and was moved to That Artsy Reader Girl in January of 2018. It was born of a love of lists, a love of books, and a desire to bring bookish friends together. The topics are scheduled in advance which you can check out here.

Today’s topic is: Books with Sensory Reading Memories (These are the books that are linked to very specific memories for you: where you were, what time of year it was, who you were with, what you were eating, etc. Ideas include books you read while on vacation, books that made you hungry for certain foods, books you’ve buddy read with loved ones, etc.) (Submitted by Jessica @ A Cocoon of Books)

1. Harry Potter and the Sorcerer’s Stone by J.K. Rowling

I was 9 years old, in the fourth grade, and my teacher was taking time each day to read us some of the book out loud. I think maybe because the whether was bad or something I have no idea. But then one day she asks the class to vote if we wanted her to keep reading or have double recess and I was the ONLY one who raised my hand to keep reading. So we had double recess but I HAD to know what was happening with Harry &co at good ole Hogwarts so I then drug my mom to the soonest book fair and made her buy it for me. And then I read it under the cover in my bunk bed with a flashlight and had scary dreams that Voldemort was coming for me and it was great.

2. The End of Eternity by Isaac Asimov

Oh man. This is one of my favorite books of all time. I read this the summer of 2013 at the beach and it just blew me away. I remember just be like YES to the theme and message of the story and just kind of meditating on it.  I think it really made me slow down and be mindful in the moment with the ocean and the night sky and being with people that matter and just doing some really intense existential big picturing thinking.  Also I wanted to gush to everyone about this book but it was long before my blog, and my friends and family often zone out when I go into book gushing mode.

3. A Wrinkle in Time by Madeleine L’Engle 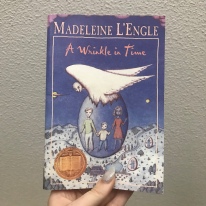 I think I also read this one in the fourth grade and it’s been a favorite of mine ever since. I haven’t seen the new movie and don’t really feel inclined to right now because my attachment to A Wrinkle in Time and others in the series is really personal and sensory and I’m not sure I want to change or influence that with the movie.  This is probably one of the first sci-fi fantasy books I read as a child and it definitely blew my mind.  The story and themes were ambiguous at times and it was one that really made me develop my use of imagination and interpretation.  In terms of some sensory memories, I did a reread of this series in middle school when I finally had my own room and I had a string lights, a lava lamp, and disco ball to read by night in my tie-dye bed and Dave Matthew’s Band came on the radio during some particular scene and the music just matched and made everything happening in the book even more ethereal, and yeah. Feels. I’m not even a huge DMB fan or anything, it was just good timing or something idk.

I read this one back in early April 2016 and it I think it was still a bit rainy, dreary and cold here in NC when I was reading it and I remember just being real snuggled up on the couch with it for two days.  Part of why I’ve included this book is because it’s such a sensory book in it’s storytelling and it really just wraps you up in it’s world. It was just such a lovely escape that it made you want to be all cozied up enjoying it.  And although that sounds ideal with all books, not all books make me feel this way. Some books have me pacing and freaking out on the edge of my seat or I’m reading so fast I can’t be bothered with my external surroundings. But this book made me want to drink tea and get a blanket and be swept away. 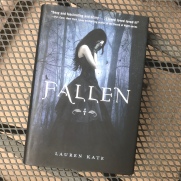 Okay I read this book back in high school I think like 2008?? In the winter and I think I was feeling all emo and I was just reading this all isolated in my bedroom in my bed and I had this song on repeat, Miss You by Trentemøller, and it was just so atmospheric.  I don’t even know if I can explain it better than that.  I never made it past book 2 in this series because I didn’t follow up with it in college and I’ve read some negative criticisms of it recently but I think because of the positive sensory memories I have I might still give this series a second chance.

6. The Martian by Andy Weir 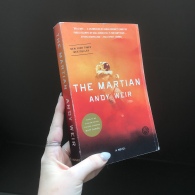 This was another beach read in the summer of 2015. It was a birthday gift from my husband because he knows I love space and sci-fi and it was getting a lot of hype.  I totally rushed through this book despite having to slow down at times to understand what the character was doing with his science-y ways.  And despite me needing to put it down several times to be like “oh my god this dude is having the worst Mars vacation ever” and then explaining every insane bit that was happening to anyone who would listen. It also made me wish I could see Mars from our beach house.

My husband got me this one in 2011 in a four pack with the others for my birthday the summer after we started dating. He had read the books growing up and the HBO show was just starting so I wanted to read the books, because as book worms know the books are always better, and because I wanted to bond with my new boyfriend over these books he loved.  I must preface this with, I have read every book and I love them, but omg are they hard for me to read.  The first one was hard because I was watching the show by then so a lot was spoiled for me so the motivation was lagging and then the switching character POVs every chapter and there being SO many different character POVs… it was just exhausting.  I didn’t have too much trouble knowing who was who and what was what but I don’t think I’ve read any books or series as slow as this one.  Also this was the summer that the 5th book came out (yes it’s been 7 freaking years already, come one George!) so I went to a book signing while I was staying in NYC that summer and bought my husband the 5th book and got it signed.  I brought my copy of the first one for him to sign too but he was only signing the newest book.  Which is a good freaking thing too, look how utterly desecrated my copy is! My books DO NOT normally end up like this but I traveled with it everywhere that summer and I was just so desperate to get through it that I clearly did not respect the binding in the process. Plus I usually prefer hardbacks for books this long for that very reason, though the other books in the series faired much better than this one.

8. Pride and Prejudice by Jane Austin

I read this in high school OF MY OWN CHOICE. No teacher forced me to read it I swear.  I decided to check it out of our school library after I became completely psycho obsessed with the 2005 movie adaptation. I watched it 7 times in the span of like 3 days, not even sorry. I even bought the soundtrack to that movie. Anyways, the reading was a little tough for me but since I saw the movie first I was able to interpret it a bit better. I read it sunbathing on my parent’s deck, listening to the movie soundtrack.  And I was really proud of myself after and glad that I did actually like the book and not just the movie.

So while I had fallen off the reading wagon a bit when I was in college, because like, parties and boys, I did read the whole Twilight series over one week my freshman year.  I was basically buddy reading this with my roommate and our friend, who he end up rooming with us sophomore year.  We wanted to read the books before the movie came out and see what all the hype was about.  And for all of us, I think the hype lived up. We were pretttttty obsessed. I was definitely reading faster than them by employing my usual unhealthy tactic of staying up all night reading and missing my morning classes the next day and they were taking school and sleep seriously or something.  Also this was one of the first and few times in my life that I’ve had people to fangirl over books with me. I remember talking to my friend in one of our classes and him being like, I just want Bella and Edward to do it already and I want it to be written out very explicitly and I was like omg yes that would make all my dreams come true.  Probably one of the first signs that I needed to start exploring the romance and erotic romance genre LOL.

I am currently rereading this series but I read it first in high school and I think I might have finished the series back in early college.  And omg I don’t know if I’ve realized it until now just how MUCH this series shaped my teen years.  I knew my friends and I had adopted some of the funny language from these books but rereading now it feels like we pretty much became these characters or these characters became us or idk. We used the word loon basically nonstop and even used to run around pretending to be French like the characters and we adopted their snagging scale.  These books and characters are straight up hilarious and bonkers and I still talk to my high school friends exactly like these books were written about us. Also I have a distinct memory of reading this at the lunch table and laughing out loud so hard and people giving me very strange looks. Still not sorry.

I feel like I may have blabbered on too much for a list meme but whatever, if you read it all thanks! Also, I think it’s worth pointing out that every book on this list I read as a physical print copy the first time around and I think that probably had an impact on the development of the sensory memories.