Confessions of Georgia Nicolson by Louise Rennison is a 10 book series, young adult comedy diary of a teenage girl living in England who attends an all girl prep school, has a fab girl gang, a bonkers younger sister, an insane cat, and is very boy obsessed. The series includes:

Here’s the Goodreads description of book 1: 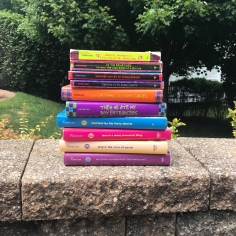 There are six things very wrong with my life:

In this wildly funny journal of a year in the life of Georgia Nicolson, British author Louise Rennison has perfectly captured the soaring joys and bottomless angst of being a teenager. In the spirit of Bridget Jones’s Diary, this fresh, irreverent, and simply hilarious book will leave you laughing out loud. As Georgia would say, it’s “Fabbity fab fab!”

I first read these books in  high school, did a reread in college before the last book came out, and decided I was in the mood recently for another reread and review, so here we are!

Georgia’s character is easily the best part of these books.  What I realized upon this reread is that she is a bit of an unreliable narrator in that this is her diary and she’s intending it to be comical so she doesn’t always portray the truth accurately about how she feels about things or how others are.  This is probably most true when she’s talking about her own parents, uncle and sister.  She’s always saying such funny but not nice things about her parents but then when her dad leaves on travel for work she writes that she teared up, when otherwise from how she writes you’d think she’d be happy he was leaving. Also how she talks about her best friend isn’t most favorable especially when she’s annoyed at her but I think that’s part of her comedy and writing her life in an exaggeratedly self-absorbed way. She also talks about having a huge nose and being ugly, but ends up dating TWO lead singers of the popular local band, her Sex God Robbie and the Luuurve God Italian Masimo, and Dave the Laugh who is arguably the coolest.  The boys are even all fighting over her at some point! Georgia definitely does come off as an overdramatic, self-absorbed, boy crazy teen but is also insecure and unsure of herself while being completely bonkers and hilarious. She supports her friends and they have crazy adventures pretending to be French or trying to entice boys.  She embarrasses herself left and right but keeps marching on to the beat of  her own drum. She is always causing mischief and mayhem at school.

She does have a tendency to judge others rather harshly and trigger warning: make fun of those who are overweight and will sometimes act/talk homophobic – though this is largely directed at her teachers and not her peers.  She and her friends will make comments about not wanting others to think they are lesbians or not wanting to shower or do yoga in front of their lesbian teacher or that she’ll have to become a lesbian because xyz boy drama. Because she isn’t the most reliable narrator and she is specifically stating that hers is a comedy diary, as well as from other context clues, I think most of her statements like these don’t reflect her real beliefs towards other people, especially as her beliefs also seem underdeveloped not by flawed writing by but her youth.   Her actions are sometimes more telling than her words as she later stands up for a girl in school that she writes about laughing at. I think it’s evident that Georgia is a dumb teen who hasn’t learned enough about the importance of sensitivity or empathy towards others yet but overall she isn’t malicious and she just thinks she’s being funny.

However, those things aside, so much of the nonsense that she’s thinks, says, and does truly is hysterical and at times very relatable.  She and her girl gang, the ace gang, have their own dialect basically of inside jokes and turning words like mature into maturiosity and nunga-nungas meaning boobs.  There is a whole glossary in the back of each book to help explain some of these bonkers words and phrases as well as to explain some British words and phrases to American readers.

Reading this series makes me so nostalgic for those angsty teen years where one stressful interaction with a crush could tailspin your whole day  or week. When school felt like jail. Feeling like you’re basically high on life from laughing until you cry with your best friends about random nonsense no one else would understand. First crushes, kisses and broken hearts.

The ace gang is excellent, they all have great senses of humor, they apply make up to make it look like they haven’t actual got any makeup on in case their teachers see but so they look good for the boys on their walks home, they roll up their skirts when they see the boys, they hold emergency meetings to prepare and debrief after each of them has a date! Its all just so so fun.  And they invent hilarious viking horn disco dancess and have a scaling sheet for kissing! And in the end I think Georgia learns the importance being herself and being with friends and boys who appreciate her in all her weirdness instead of holding back the bonkerosity side just to date someone she’s put up on a pedestal.

While the words Sex God might be misleading, this is a clean book series with no sex.  Georgia is 14 in the beginning of the series and I think she’s only 15 or 16 at the end of the series.  There is a lot of snogging, aka kissing, and some weird breast touching moments but that’s all! There is also a weird thing where the girls go see this guy for free kissing lessons that is totally bizarre and idk how they could have gone along with that.

The first book was published in 1999 and the last in 2009. Based on the lack of cell phones and technology present in the stories I’d guess that the setting is based more in the late 1990s and early 2000s.  Georgia mentions wanting a mobile phone at some point but none of her friends, or family has one and she doesn’t discuss any use of social media even through a computer chat. The ace gang call each other on their house phones and even pay phones and boys write her actual posted letters.

Overall, I love these books and they are probably one of my favorite series. These seriously make me laugh out loud so hard.

If you’ve read and enjoyed these books, there is another series called The Misadventures of Tallulah Casey which is another very funny diary style series about Georgia’s cousin Tallulah.  There are only three books in that series and I suspect there were meant to be more but the author Louise Rennison passed away in 2016.