Slave to Sensation is the first book in the adult paranormal romance Psy-Changeling series by Nalini Singh.  I’ve seen this book everywhere and on every list for paranormal romance, including some of Singh’s other series, and it’s been on my TBR for a while.  It’s the first book by Singh that I’ve read and I’ll definitely be coming back for more. I was on the fence about which of her series to start first, Psy-Changeling or Guild Hunter.  Now that I’ve read this one I’ll probably give the first Guild Hunter book a go next. 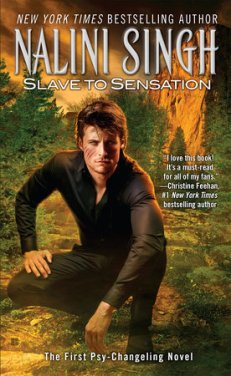 Nalini Singh dives into a world torn apart by a powerful race with phenomenal powers of the mind-and none of the heart.

In a world that denies emotions, where the ruling Psy punish any sign of desire, Sascha Duncan must conceal the feelings that brand her as flawed. To reveal them would be to sentence herself to the horror of “rehabilitation” – the complete psychic erasure of everything she ever was…

Both human and animal, Lucas Hunter is a changeling hungry for the very sensations the Psy disdain. After centuries of uneasy coexistence, these two races are now on the verge of war over the brutal murders of several changeling women. Lucas is determined to find the Psy killer who butchered his packmate, and Sascha is his ticket into their closely guarded society. But he soon discovers that this ice-cold Psy is very capable of passion – and that the animal in him is fascinated by her. Caught between their conflicting worlds, Lucas and Sascha must remain bound to their identities – or sacrifice everything for a taste of darkest temptation.

For me, Slave to Sensation was a well done paranormal romance and was exactly what I was looking for when I picked it up.  The hero, Lucas was quite likable especially as I have a love for cat shifters – though as a critique he was a bit of a cookie cutter alpha. His sensuality was most enjoyable about him as well as his loyalty to his mate and pack – however he didn’t have enough oomph to quite make book boyfriend status. The heroine, Sacha is a Psy, which was very intriguing to learn about since this seems to be a new paranormal race to me.  Psys are psychic kind of and all have different things they can do and they are all connected to the Psy-net inside their minds and need the psychic feedback from it and each other to survive.  They are also all brainwashed growing up to have no emotion so as to avoid anger and violence and be the perfect race – however Sacha feels and understands emotion and has a serious need for physical touch. Because of this she is panicked about getting found out by the other Psys and then basically being lobotomized.  She’s also “flawed” in that she’s supposed to be super powerful but no one can figure out what her speciality is (I figured it out before she did – ha!).  Sacha annoyed me a little with being so sure that she’s flawed and not thinking outside the box but I realize that was the point since she was basically programmed to think a certain way – but it felt a little like I was being beat over the head with how flawed she was – we get it and we don’t buy into it so lets move on.

The show down with the big bad left me with some questions and it was pretty anticlimactic. Being in the Psy-net is a bit abstract so I think it makes confrontation a little .. tricky, so I get it.  But really I thought there would be some on screen battle and bloodshed from the Changelings and we really don’t get that. Also I was super surprised that while there are humans in this world, there weren’t any in the story.

I think the ending wrapped up nicely with a HEA you’d want from this kind of book but I did feel like it was a bit obvious where it was going and I again figured it out before the characters did. Most of the characters could have used more depth and development because some back story and motivation doesn’t necessarily equal depth. Tamsyn felt like the most developed side character. (Also side note, pack alphas kiss all the ladies on the mouth in a nonsexual greeting or something strange and it really weirded me out but I think it was intentional so idk lol).

And I usually never make this critique, but I actually could have done with more sex scenes and with more description because the most descriptive ones we got were “dreams” and idk I feel like with Sacha having NEVER been touched before, there could have been a lot to tease out and unpack there.

Even though I had a bunch of criticisms I really did like this story and world. It has the mate trope and the forbidden love trope which are two of my favorites. It was fun entering a new paranormal world and it really hit all the marks I’m looking for in a good paranormal romance. I think because there are so many books in this series it’s only going to get better and better too as the world, characters, and writing develops.

Would recommend for fans of paranormal romance with shifters and psychic magic, mate trope, and forbidden love trope.